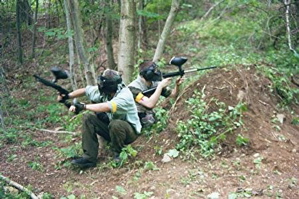 Describe Croatia and you might come up with adjectives like relaxing, laid-back, chill, even sedate. A typical Croatian vacation consists of hanging out on the beach or people watching in a cafe. But a significant number of people are now turning toward adding thrills to their vacations, and to paintball as a way to get that adrenaline rush.

Paintball has ridden the wave of popularity of other outdoor sports like river rafting and mountain biking and now several companies split the duties of providing outdoor recreation opportunities to the travelers and locals who want to add them to their vacation itinerary.

Most paintball competition in Croatia is outdoor, in fields or forests with built in obstacles and cover for players. Mediterano offers paintball on Korcula island and provides vests and coveralls to help lessen the sting when you get hit. Mediterano advertises paintball as a team-building activity and says that corporate groups receive a huge benefit from the activity. Cause who doesn’t sometimes want to shoot their coworkers with paint?

There are also paintball clubs in Porec, Kustosija and a few leagues that travel up and down the country to play teams from other cities. Czech travel company Dalmacija Tour offers a trip through Croatia emphasizing action sports and adventures, paintball included.

Recreational paintball for travelers is available near any major city in Croatia, although you may have to travel outside the city into the country to actually play. Jarun Lake, outside of Zagreb, for example, runs paintball games on its huge course everyday from 9am to midnight and sometimes later. Dune buggy’s and quads are also available to facilitate an added adrenaline rush.

If you find playing war games in a country that was fighting for its independence only a decade ago a little unsettling, you’re not alone. But be aware that most paintball clubs treat paintball as a game and emphasize having fun over shooting each other. Most call it “marking” each other and paintball guns are “markers.” It’s a small distinction that may seem smaller when you’re crouching through the brush doing your best Rambo impression, but in the end it is just a game. Paintball in Croatia is a response to the demand created by the ban of the sport in Germany. Croatia hosts many German tourists each year and providing paintball is a way for Croatia to give their guests an experience they can’t get in their home country.