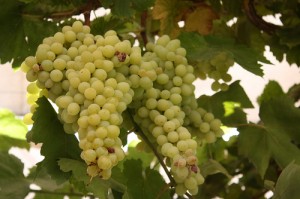 Mendoza is the center of the wine industry in Argentina. It is also close to the Aconcagua, the world’s second highest peak. It is a popular vacation spot both for those who want to enjoy some wine tasting and those looking for an adventure. During winter (June to late August), the area draws many snow enthusiasts as it is home to great ski centers. It would be a shame to visit Argentina and not plan to stop in Mendoza, as well.

The main airport serving Buenos Aires is Ezeiza International Airport (EZE), which handles all international flights and some domestic ones. It is the largest airport in Argentina and a hub for Aerolineas Argentinas , LAN Airlines and SkyTeam. Most domestic flights depart from Aeroparque Jorge Newbery (AEP).

Mendoza is served by a small airport, El Plumerillo (MDZ) which receives flights from Buenos Aires (from both airports), run by Aerlonieas Argentinas and LAN Argentina.

It’s cheaper to fly from Buenos Aires’ Aeroparque airport (AEP) into Mendoza than to fly from the main airport. Flights start at US$215 one way on LAN Airlines. The travel time is about 2 hours.

Buses from Buenos Aires to Mendoza

There are more than 10 companies that offer daily direct connections between Buenos Aires and Mendoza. The travel time is between 13h 30 min and 14 h 30 min, depending on the type of bus and company. There are departures during the day but you can also choose a night bus. Tickets cost between 350 Argentine pesos / US$83.50 and 470 Argentine pesos / US$112, per person, one way.

Some of the companies offering connections between the two cities are: Cata Internacional, El Rapido Internacional , Viajes Sendas, Andesmar and Flecha Bus.

Driving from Buenos Aires to Mendoza

Although the driving distance between Buenos Aires and Mendoza is long (1049 km), you can turn this journey into a lovely road trip. So, rent a car and prepare for about 12 hours of driving. Make sure to allow for stops along the way and remember that you’ll also be driving on toll roads. 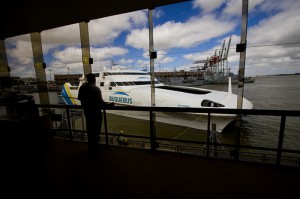 Montevideo is the capital of Uruguay , located on the bank of the Rio de la Plata. The Old Town, along with the squares and museums can keep you occupied for several days. Montevideo is located close to Buenos Aires and many travelers choose to visit both cities on their vacation.

Choosing the means of transportation is a matter of deciding how fast you want to travel between the two cities and what your budget can accommodate. It’s slightly more expensive (from US$73 one way) to travel by plane but you get between Buenos Aires and Montevideo in less than an hour. If you have more time on your hands and you are on a budget, the ferry is a good alternative (from US$41 one way) and you get between the two cities in 3 hours.

Ezeiza International Airport (EZE) is the international airport serving the capital of Buenos Aires. It is also the country’s largest airport and a hub for Aerolineas Argentinas , LAN Airlines and SkyTeam.

Aeropuerto Internacional de Carrasco (MVD) serves Montevideo and is the largest airport in Uruguay. It is hub for Pluna.

Flights between the two cities are operated by Aerolineas Argentinas, BQB Lineas Aereas, Pluna and Sol Lineas Aereas. Most fights connect to/from Ezeiza , but Sol flies on the secondary airport in Buenos Aires (Aeroparque – AEP) and Pluna has flights on both airports serving Argentina’s capital.

Boats from Buenos Aires to Montevideo

It is possible to take a high-speed ferry between Buenos Aires and Montevideo. The ferries are operated by Buquebus . The travel time is 3h 15 min and the tickets start at $178.42 UYU / US$41 (promo web). There are several departures per day , the earliest being at 8 a.m.

In Montevideo, the ferry terminal is in Ciudad Vieja district, which is located close to downtown.

Buses from Buenos Aires to Montevideo

Three bus companies offer connections between Buenos Aires and Montevideo. The travel time is about 8 h and the tickets start at 160 Argentine peso / US$38 per person, one way. There are departures during the day, but there are also night buses. 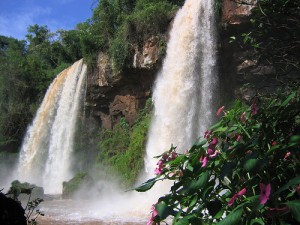 Buenos Aires is the capital of Argentine Republic and of the largest cities in Latin America. Popular for the football and tango, the city is also a very good base for exploring the rest of Argentina and the near-by countries.

Iguazu Falls, one of the great natural wonders in the world, should be on your must-visit list when you are planning a vacation in Argentina.

Access to the falls is done through one of the tri-border cities:

Since you are already in Argentina, it makes sense to travel to Puerto Iguazu and visit the Argentinean side of the falls. Once there you can consider taking a bus to Foz de Iguacu, go through customs and visit the Brazilian side, as well.

If your vacation time is limited, consider flying. It takes less than 2 hours to reach the falls by plane from Buenos Aires but you’ll rack up from US$200 per person. A cheaper option is the bus. A ticket is about half of what you pay for a plane ticket and you’ll travel during the night.

Ezeiza International Airport (EZE) is the international airport serving Buenos Aires. It is the country’s largest airport and a hub for Aerolineas Argentinas , LAN Airlines and SkyTeam.

It’s inexpensive and comfortable to travel from Buenos Aires to Iguazu Falls (Puerto Iguazu). The company running this route is Expreso Tigre Iguazu . The travel time from the capital to Iguazu Falls is about 16 hours. Dinner and breakfast is served and you can also sleep in a bed during the trip. The round trip ticket is US$80-90 for an adult.

From Puerto Iguazu there are buses to the entrance of the falls, every half hour. Tickets cost AR$15.

Although the distance between Buenos Aires and Iguazu Falls is long (1288 km), renting a car and driving through Argentina can be an interesting adventure. Allow several stops along the way or. The total drive time is about 15 hours (stops excluded). Do consider that you’ll be driving on toll roads. 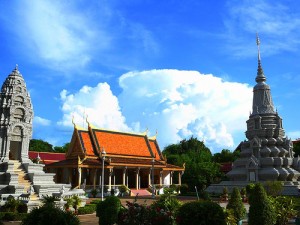 Ho Chi Minh City (or Saigon) is Vietnam’s largest city , famous for being home to the Reunification Palace. The markets, the Chinese temples and the museums also attract tourists.

Phnom Penh is the capital city of Cambodia and a transit city for those who want to visit Ankor Wat. Over the past decade, the Ho Chi Minh to Phnom Penh travel route has gain more and more popularity as both locals and travelers want to explore what this part of Asia has to offer.

The distance between the two cities is only about 250 km so it doesn’t make sense to fly (and it’s expensive also). Your best bet is to get a bus ticket (from any travel agent in either city) and spend 5-6 hours traveling between Ho Chi Minh City and Phnom Penh for just US$9-15 one way.

Flights between the two cities are run only by Vietnam Airlines. This means there’s no competition on this route and the rates are quite high. Expect to pay from US$173 for a single adult fare. The flight time is 40 min.

There is no railway between the two cities, which means, the only overland option is the bus. Several bus companies operate daily connections between Ho Chi Minh City and Phnom Penh, with the first departure at 7:30 a.m. The travel time is about 6 hours. The bus ride includes a short ferry ride across the Mekong river.

Some of the companies running daily connections between the two cities are: Kumho Samco, Mekong Express, Sapaco Tourist and Mai Linh.
In Ho Chi Minh City, the buses depart from the station at 237 Pham Ngu Lao Str, Ben Nghe Ward, 1Dist; while in Phnom Penh there isn’t a centralized bus station.

Rates are generally about US$10-15 single journey. It’s best to avoid the low-cost carriers (US$6-7 for a ticket) because the conditions are typically quite bad (doors don’t close, old buses) and make you switch buses at the border.