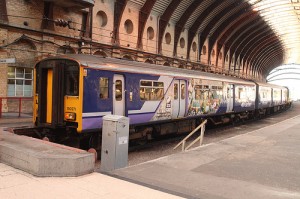 York has a history which dates back to the Roman times and is home to some of the best preserved historical buildings in England and Europe. In Roman times, it was known as Eboracum and was one of the important Roman cities in Britain. The Vikings also ensured a major urban revival for the city. Nowadays, it’s a small but charming English city , home to plenty of festivals.

The closest airport to York is Leeds but it doesn’t offer too many options for flights. In fact, it’s a more expensive option than Manchester’s Airport , which is the largest British airport outside of London, served by a variety of carriers.

Getting from York to Manchester is easy: the cheapest option is the bus, but the fastest is the train (and the fare difference is not too much between the two means of transportation).

Trains from York to Manchester

First also operates daily trains between the two cities, leaving every 10 to 30 minutes. The travel time is the same and the fares start at £12.00 one way.

Buses from York to Manchester

National Express offers buses every hour, daily between York and Manchester. The travel time is 2 ½ h and the single fare starts at £10.30 but depends on the time of departure.

Driving from York to Manchester

You can rent a car in York and drive the 75 miles to Manchester – or the other way around. The travel time is about 1 ½ h but it does depend on the traffic.