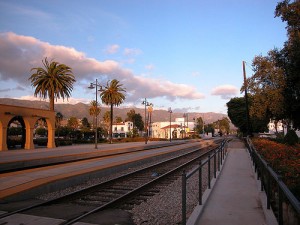 “Riviera of the West” or Santa Barbara is perfect for a day trip from Los Angeles . Located about 100 miles from the City of Angels, Santa Barbara is well known for its beaches, wineries and the many shopping options. You might know it to be the playground of the rich and famous, but don’t worry, a day or two here won’t break your budget.

If you choose the afternoon train between Los Angles and Santa Barbara, then that’s the cheapest option: $16* one way. Otherwise, buses remain the most affordable way to travel between the two cities ($19.35 one way).

Although LAX is the closest large airport to Santa Barbara, the city is served by its own airport Santa Barbara Municipal Airport (SBA), which handles about 30 daily flights to/from US cities, including Los Angeles. The airport is located about 7 miles from downtown.

The travel time is 2h 25 min. The cheapest fares are in the afternoon: just $16 for a single adult ticket. On the morning train, the fares start at $36 one way.

You can rent a car and drive the 95 miles via US-101 N between Los Angeles and Santa Barbara. Part of the road is along the coast, so you’ll be rewarded with superb views. The travel time is 1h 45 min.

Note:*at the time the article was written