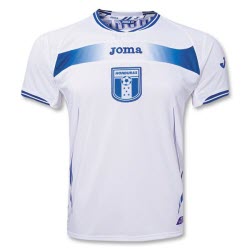 The world’s biggest sporting event, the 2010 World Cup, is coming very soon, and it’s time to throw your support behind the Honduras national team as they enter their first World Cup since 1982. Los Catrachos will have a tough road to qualify for the later rounds, but they bring one of their strongest squads ever to this tournament, so they might just be a dark horse contender.

Get to know the team:
Honduras doesn’t have as many players from the big European leagues as some other countries do, but there are a few excellent players on the squad who could make a real impact in the World Cup. Carlo Costly has only been playing with the national team for 3 years but is already 8th on the all-time Honduras scoring list with 14 goals for his country. Amado Guevara has spent much of his career in the United States, but has returned to Honduras to play his club football now, and is captain of the team. Other stars include Maynor Figueroa and a potent strike partnership of Carlos Pavon and David Suazo.
>> Check out the entire Honduras World Cup squad.

Wear the gear:
Honduras has new home and away kits for this World Cup, and there’s no better way to show your support for the team than to get your jersey and wear it on match days. The Honduras home jersey is white with a blue pattern across the chest, and the Honduras away shirt has white and blue vertical stripes, with a large blue “H”. Get your kit and be ready to kiss that crest when the first “golazo” goes in.

Know the enemy:
That “H” on the away jersey will be doubly significant, since Honduras has been drawn into World Cup Group H. They will fancy their chances to take points away from Switzerland, but will face two serious challenges in the other group matches, against a very strong Chile team that beat Argentina in qualifying, and against the mighty Spain, already champions of Europe and looking to add their first World Cup trophy to that achievement.