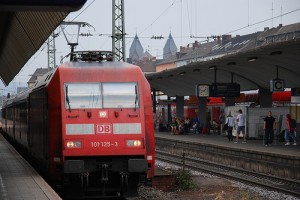 Heidelberg is a very important travel destination in Germany and is located in the Neckar River valley. It is home to the oldest university in the country. After World War II the city came out almost untouched by the bombs, so it retains the baroque charm of narrow streets and castle ruins.

Frankfurt is the business and financial center of Germany, home to the country’s largest airport. It’s where you’ll most likely land, especially if you arrive from another continent. Frankfurt is a transportation hub, the place where roads and railways meet. The old city center, the Dom and the Iron Bridge are only some of the city’s landmarks.

Unless you plan to travel from Frankfurt Airport to Heidelberg – where you can catch a bus -, the option for traveling between the two cities is the train. Train tickets are the cheapest option. On the slower trains (1h 45 min) the fare is €16.40 one way. High speed trains are a bit more expensive (€19 one way).

Trains from Frankfurt to Heidelberg

Buses from Frankfurt to Heidelberg

If you land at Frankfurt Airport , you can take the Lufthansa Shuttle Bus to Heidelberg. There are departures from 7 a.m. until 11 p.m. daily, every half an hour to two hours, depending on the time of the day. The single fare is €22.

Driving from Frankfurt to Heidelberg

You can rent a car in Frankfurt and drive the 94km to Heidelberg is about 1h (depends on the traffic) on A5.