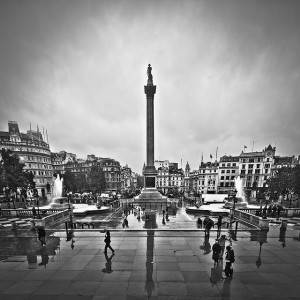 The city of London is one of the most well-known and popular destination on earth. As the capital city, London is often referred to as the capital of the world, and in fact has the largest population of any urban area in Western Europe. Visitors will find countless fantastic attractions in the city, from world-class museums and art galleries to historical landmarks like Big Ben, Westminster Abbey and the Tower and Bridge of London. Two of the most popular attractions in the city are the London Eye and Trafalgar Square. The following is an introduction to these two attractions.

This giant wheel is an impressive structure that dominates the skyline of England’s capital city. Due to a recent sponsorship deal, the official title has changed from the British Airways London Eye to the EDF Energy London Eye. It stands at 443 feet tall, and is located along the Thames River. As the tallest ferris wheel in the Europe, and the world’s tallest cantilevered observation wheel, it should come as no surprise that it the most visited paid tourist attraction in the entire country of England.

Each year, well over 3 million visitors take a trip on the London Eye and climb into one of the 32 glass domes, many of which have tour included within their London holiday packages. Each domed pod holds up to 25 people, who can sit or stand during the 30 minute revolution. The speed is quite slow, meaning anyone can ride it and few people complain of motion sickness or discomfort. Since the opening of the London Eye in 2000, it has become an icon in the city of London. For significant national occasions, the wheel is outfitted with stunning lights in themed colors. Recently, it donned patriotic colors to resemble the Union Jack for the royal wedding between Prince William and Kate Middleton, and in 2012 it will be outfitted with the Olympic rings.

This public space is one of the most popular tourist destinations in the city of London. Created in the 19th century, it was designed to be a public area that was a central focus of culture and politics in the city. Indeed, it has served that purpose for decades. The focal point of Trafalgar Square is the Nelson’s Column, which dominates the look of the area. The column stands at 169 feet in height, and was created to in honor of Admiral Horatio Nelson, who died during the Battle of Trafalgar. At the four corners of the base of the column are lion statues, who are meant to guard the column constantly. Until the last decade, the square was known for the massive population of pigeons who called the square home, thanks to millions of tourists who fed them. Those were eventually removed and feeding made illegal, and today it is more commonly used for political demonstrations, screening sports events, and holiday celebrations like Christmas and New Year’s Eve.