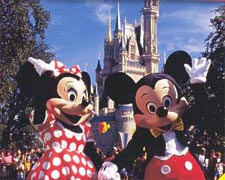 As someone who grew up only a few miles from Disneyland, it’s not always easy to put myself in the shoes of someone who’s coming to visit the place for the very first time. I probably visited the park about 20 times over about 10 years, so it sometimes feels like my backyard. Coming to Los Angeles to visit Disneyland is a major highlight for hundreds of thousands of people each year, but at the same time there are some pitfalls to be aware of, which I’ll cover just below.

Absolutely it is. After traveling around the world I can honestly say that very few things match Disneyland (or Disney World) for sheer excitement and novelty. But the deeper question is whether you should plan your entire trip around that visit, and I think the answer is no.

If you are coming from another country and you’ve gotten some international air tickets that get you to LAX, then you’ll only be about 40 kilometers from the park once you land.

If are coming domestically then you have several more airports to consider when looking for cheap flights to LA. Still, the best deals tend to be into LAX, so next you are probably wondering how to get from Los Angeles to Anaheim. We’ve covered that subject in the article linked here, but the bottom line is that renting a car is probably your best bet, though there are various buses and other possibilities.

This is where things can get tricky. There are several large and quite luxurious hotels located on the grounds of the park itself, so if you can afford it you might look into the hotels at Disneyland. But the city of Anaheim is quite large, and there are plenty of cheap places located within a few miles of the park. Generally speaking, hotels in Anaheim are fairly cheap compared to the ones that are on the grounds, but there are some run-down places mixed in so pay attention to the ratings for a place you want to book.

Should you really stay in Anaheim?

If you and your family are flying to Los Angeles and you plan on spending at least two days in the various Disney parks in Anaheim, then staying in the city isn’t a bad idea. But if you only want to spend one day in Disneyland then you really should think about staying elsewhere. There are great hotels near the beaches in Newport or Huntington, and both of those are in Orange County and close by. There are also plenty of great hotels in other parts of Los Angeles. The point is, the rest of Anaheim is a bit cheesy and parts of it are falling apart. If you want to stay near great restaurants and other attractions, choose somewhere other than Anaheim.