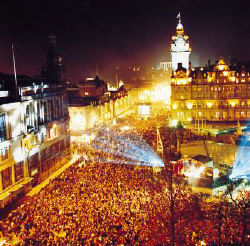 Edinburgh in winter might sound like it would be dreary, but it’s decidedly not. And one of the main reasons is that one of the city’s best festivals takes place at New Year’s – it’s Hogmanay in Edinburgh.

Hogmanay, which means “last day of the year” in Scots, is usually at least a two-day holiday covering December 31 and January 1, and it can even stretch into January 2 as well. Historically speaking, it’s a pagan celebration, and during the reformation it was celebrated in secret. Since the end of the 17th century, however, it’s been back out in public and these days it’s one of the best reasons to visit Edinburgh in the winter.

Adding Edinburgh to your round the world trip

Some towns in Scotland participate in certain Hogmanay customs – like swinging big balls of fire around at midnight in a race around the town or blessing the household with a burning juniper branch – but if you’re looking for an all-night party to ring in the new year, then you’ll want to book yourself a room in Edinburgh.