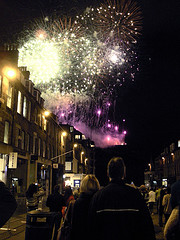 Each year, my New Year’s Eve plans range between: night in with my better half, night with parents, party with friends or concert in the city’s public square…and , honestly, it gets really boring after a while. So, I’ve decided to do something totally different this year. Yes, travel to a city which holds interesting New Year’s Eve celebrations.

In Europe, among the interesting places to celebrate New Year’s Eve are: Edinburgh, Paris and Barcelona. I’ve always had a soft spot for Edinburgh though, so celebrating Hogmanay this year sounds absolutely amazing.

Christmas and New Year’s Eve are busy traveling times and the rates are higher than during the rest of the year (but slightly lower than during peak summer season). So, start looking for the cheapest flight to Edinburgh ahead of time. You could easily plan to arrive in the city on December 29 (the celebrations start on December 30) and leave the city on January 3 (after you manage to see some of the city when it’s not overcrowded). A round trip flight from London starts at £95 per person (on easyJet); of course, that’s unless you manage to find a deal.

Also, look for hotels in Edinburgh while you plan your flight. Of course, it’s not hard to find expensive rooms but when you want cheap accommodation you need to spend a bit of time researching the options. You can find 2-star hotels at £86 per night but the hotel is located far from the center. On the other hand, hostels can be a good choice especially if you travel with your friends. Private rooms start at £40 per night and the hotel is located close to the city center.