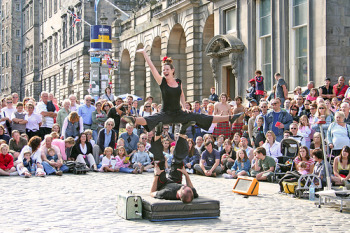 Edinburgh, the capital city of Scotland, is one of the most popular places in the country to visit. And at no time is it more popular than during the Edinburgh Fringe Festival, an annual event that takes place each August and is one of the best outdoor festivals in the world.

The festival is an open-air arts fest that brings together theatre, visual art, music, comedy and performance art that spills out onto the streets of the city. The festival developed “on the fringe” and continues to be a venue for lesser-known and more avant-garde artists.

Visiting during the Fringe Festival is difficult, but worthwhile. Hotels and hostels book up well in advance and rates are much higher than during other times of year, but the trade off is the chance to see random art just about everywhere you look in the city.

With large city-wide events like this, we tend to notice two trends. In order to score good Fringe Festival deals, you either need to book very far in advance, or you need to wait until a month or so before the date. Waiting until the last minute like this is a gamble and there’s a good chance all the best hotels are sold out, or priced far beyond your reach. However, it is still possible to find cheap Edinburgh hotels willing to cut a deal on some unsold inventory. The hotels may not be your first choice – they may be located farther out of the city center or may be more basic that what you prefer – but when there is so much going on in the city, you won’t be spending much time in the hotel room anyways.

Likewise, you can often find some excellent deals on flights to Edinburgh if you wait till just a a few days or weeks out. Low cost carriers like RyanAir are notorious for waiting until the last minute to slash their fares and get rid of unsold inventory, and in those circumstances, it definitely pays to wait until the last minute to finalize your travel plans. 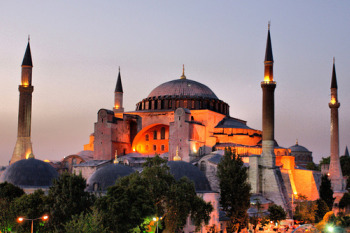 Every year, one or more “European capitals of culture” are chosen to highlight some of the amazing culture and history that can be found throughout Europe. In 2010, one of those European Capitals of Culture is Istanbul.

Straddling two continents (Asia and Europe) Istanbul is a mish-mash of cultures, religions, and cuisines. The city was the seat of three successive empires – Roman, Byzantine and Ottoman – and traces of each stage in its development are still evident everywhere you look – from the sparkling cerulean tiles of the Blue Mosque to the lavish rooms of the Topkapi Palace.

You can literally walk through different stages of history here, take a boat ride from one continent to another, and examine the juxtaposition of old versus new.

There are dozens of activities lined of to celebrate the city’s inclusion as a Capital of Culture; the events take place all year round so the ideal time to go depends more on your budget. Your best chance to find cheap flights to Istanbul is during the spring and fall. More cheap hotels in Istanbul are available during this time as well.

As elsewhere in Europe, the most popular times (and therefore the most expensive) to visit Istanbul tend to be during the summer months and over the holidays. Shoulder season (late spring and early fall) are a good compromise. Prices may be lower, tourist crowds will be fewer, and you’ll still be able to enjoy all the sights and culture of Istanbul, but without the sweltering heat that accompanies the height of summer. 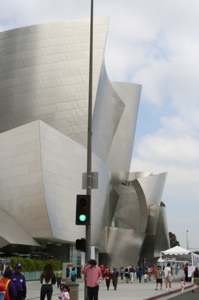 The most striking thing about Walt Disney Concert Hall is the architecture. The curving metal faces of the structure seem to peek around corners and stare down streets. You catch glimpses of the concert hall from odd angles through the buildings of the city and your view of the structure sticks in your mind. Light plays tricks, casts odd shadows and certain angles seem to gleam prominently while others are cast in shadows.

The concert hall is certainly a sight to behold.

It is also a fine place to catch a show or symphony concert. The Los Angeles Philharmonic plays concerts eight times a week, two concerts a day on Thursdays, Fridays, Saturdays and Sundays. The LA Philharmonic is one of the top classical music organizations in the world and brings in some of the best guest talent to perform alongside it throughout the year.

The Walt Disney Concert Hall is a relatively new addition to the downtown area. A gift from the Disney family for a new concert hall in 1987 accumulated interest and generated other donors who put up the rest of the money for the concert hall. The county of Los Angeles provided the land and funded the construction of the parking garage. The building sits alongside the other performance halls in downtown, but was only completed in 2003. This is the LA Philharmonic’s 4th year in the building.

The hall is also used for other events. Concerts, TV show tapings like American Idol and the occasional charity event are held in the Disney Concert Hall.

Friday afternoon LA Philharmonic shows are the “casual Friday” shows where orchestra members and conductor Leonard Slatkin dress in casual clothes instead of the requisite tuxedo or formal wear as is the norm at symphony concerts.

Tickets to the LA Philharmonic or other events at the Walt Disney Concert Hall are available at the hall’s website. There are available payment plans and group discounts, as well as free shows every few months for special events.

The Disney Concert Hall is located at 111 South Grand Avenue, Los Angeles, CA 90012. Public parking at the hall is available underneath the structure and is accessible on Second Street, or across from the concert hall on Grand Avenue. Valet parking is available at the front of the building on Hope Street.